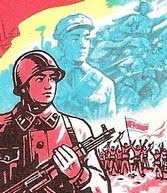 North Korea’s state media reported its leader Kim Jong-un had visited front line troops that were responsible for the shelling of Yeonpyeong Island in 2010. KCNA said Kim had ordered the troops to retaliate in the case South Korea shells North Korean waters ahead of the joint Key Resolve training South Korea and U.S. troops have scheduled in the western coast of the Korean Peninsula. The North Korean report said Kim Jong-un inspected the fourth battalions and received plans for retaliation during a visit to a watchhouse for coast-battery and even guided soldiers through battery training. The training was attended by soldiers who had taken part in the shelling of Yeonpyeong Island, the report said. North Korea said on Saturday through a spokesperson’s statement that it would launch a “sacred war” against the Key Resolve training.
(KBS World Radio, 2012-02-26)
Publié par DPRK Monitoring à 23:22